After our article on art in hotels we decided to provide inspiration in other areas where applied art is of added value. Presenting: applied art in subway stations! Public transportation, but specifically subway stations are becoming the new must-see destinations for art and design enthusiasts. Some of the most inspiring public spaces incorporating large-scale art and design can be found in many cities’ metro stations. All this art is really beneficial for the subway itself. Increased ridership and tourism, creation of a sense of place, and community are some of the benefits. Art in transportation can also lead to decrease in greenhouse gas emissions, vandalism, and commuter boredom.

Advising clients on the impact art can have in hospitality is Arttenders’ core business. Therefore, Ioanna Koubarou dove into the world of applied arts and gathered art in subway stations all over the world that serve as an inspiration for future projects.

The value of applied art in subway stations and public transportation

According to a study made by the France’s Urban Development institute, Parisians spent on average 23 days a year on transport. And this is not an exception. People all over the world use public transportation to commute to work.

Art in public transportation can make transit stations more than just places to wait. To build the image of transit as an amenity in the community requires recognition of and sensitivity to the fact that the quality of the transportation experience directly affects the quality of the lives of transit users. The experience of travel by transit should be an attraction in itself. Public art can draw out the identity of a space, aid the understanding of the historical or cultural significance of a neighborhood and its residents. Combining the skills of artists with those of transit engineers, planners, and architects in the design of public spaces related to transit has been successful and at times difficult. Public transportation art projects can be found all over the world, from sculptures, mosaics, paintings to bigger ventures like installations, engravings and reliefs.

On New Year’s Day 2017, when the Second Avenue subway opened for service with 3 new lines, people were taken by surprise when they come across ambitious contemporary art. The project was commissioned by the Metropolitan Transportation Authority (MTA) and was consisted mostly from mosaics made by contemporary artists. 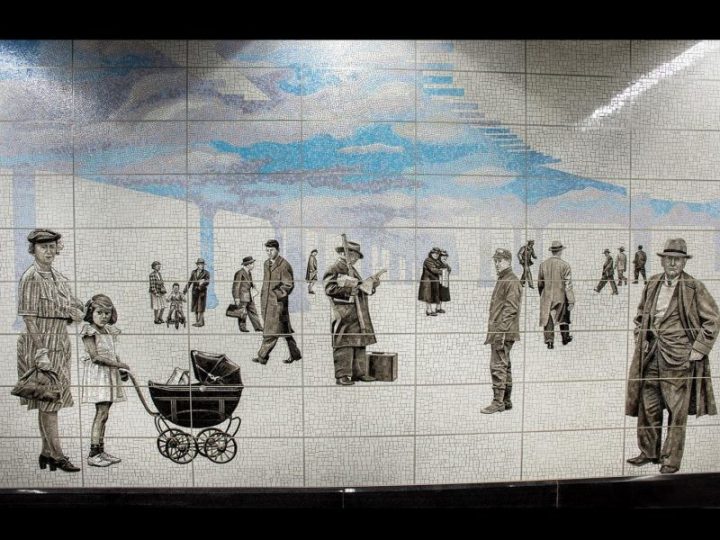 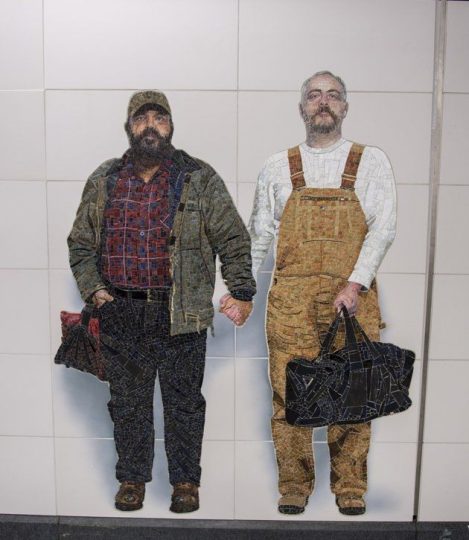 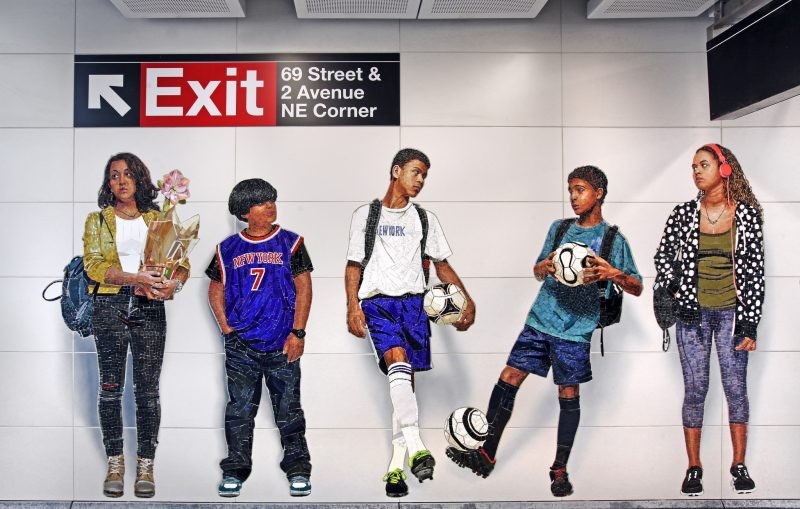 The world’s longest art gallery, as it is referred to, are the underground train lines of Stockholm, Sweden. More than 90 of the 100 stations in the 110km tunnel system, have been decorated with art by 150 artists since the 1950s. Traveling by subway is like traveling through an exciting story that extends from the artistic pioneers of the 1950s to the art experiments of today. The Visit Stockholm website states: ‘The art makes the stations perceived as more beautiful, safer and it helps to make the trip into something more than just a transport between two places.’

Formosa Boulevard station is recognized by its huge Dome of Light by Narcissus Quagliata: “The dome is the world’s largest public art installation made from individual pieces of colored glass.” The dome tells the story of human life in four chronologically arranged themes: Water- The Womb of Life, Earth- Prosperity and Growth, Light- The Creative Spirit and Fire- Destruction and Rebirth, with an overall message of love and tolerance.

In Georg-Brauchle Ring station on the U-bahn artist Franz Ackermann created ‘The Great Journey’ from 400 metal panels – two huge colour screen walls. Each of the rectangles weighs 135 kg, each wall carries almost 30 tons. The Munich (München) metro system, also known as the U-Bahn, began running in 1971 just before the 1972 Olympics. It comprises of eight lines and around a 100 stations, encompassing 95 km of tracks crawling under the city. In each metro station a passenger can discover vivid color schemes, glass and ceramic tiles which form bold patterns, and even ceiling mirrors to keep him/her intrigued and busy. Almost every station has some prominent art element associated with it. It can be the color scheme of the tiles, the overhead lighting design, the stairs and the escalators in some, or just a colorful wall in some cases.

Georg-Brauchle-Ring station – Clean design paired with a bold and energetic wallcovering make this one of Munich’s unforgettable stations. (Photo: sumit4allphotography)

As you can imagine, digging anywhere in Athens runs the risk of digging up something, so imagine when the city began constructing an underground railway system that runs directly through the entire downtown area? One of the country’s biggest infrastructure projects, construction of the metro, which began in the early 1990s, yielded around 50,000 ancient artefacts in what soon became the single most important archaeological excavation ever conducted in Athens. Since opening in the run-up to the 2004 Olympics, the network has also served as an underground museum, with stations in the capital’s historic center exhibiting finds exactly where they were unearthed. The Athens Metro stands out in more ways than one: although among the most modern underground systems in Europe, it is sited in an archaeological treasure trove that is not only the world’s richest but its oldest, too.

The Metro began operating in Moscow in 1935 with a single 11 km line connecting just thirteen stations, but it has since grown into the world’s fourth busiest transit system, spanning more than 300 kilometers and offering 188 stops along the way.The Moscow Metro was one of the USSR’s most extravagant architectural projects, with stations constructed as luxurious “palaces for the people”. Built under the command of Stalin, the iron-fisted leader ordered the metro’s artists and architects to design a structure that embodied svet (radiance or brilliance) and svetloe budushchee (a radiant future). He directed his architects to design structures which would encourage citizens to look up, admiring the station’s art, as if they were looking up to admire the sun and—by extension—him as a god. With their reflective marble walls, high ceilings and grandiose chandeliers, many Moscow Metro stations have been likened to an “artificial underground sun”.

The RET metro station at Rotterdam Central Station was designed by Maarten Struijs. For years, he has been employed by the City of Rotterdam as an architect. During this period, he has built an impressive oeuvre which includes the Hartelkering, the windscreen at the Caland Canal, the Rookgasreiniger, the subway stations Beurs and Tussenwater and the underground stations of RandstadRail. The design is based on 3 principles: Air, Light and Body. Body means the best possible routing; Air means the structure of the space so that it does not prevent the routing and creates a sense of space and security; The light, in relation to color, makes the station a place for travelers, where they see and feel comfort and safety. To enhance the ‘station experience’ of the traveler, the RET implemented a citrus scent and classical music in the Rotterdam subway. 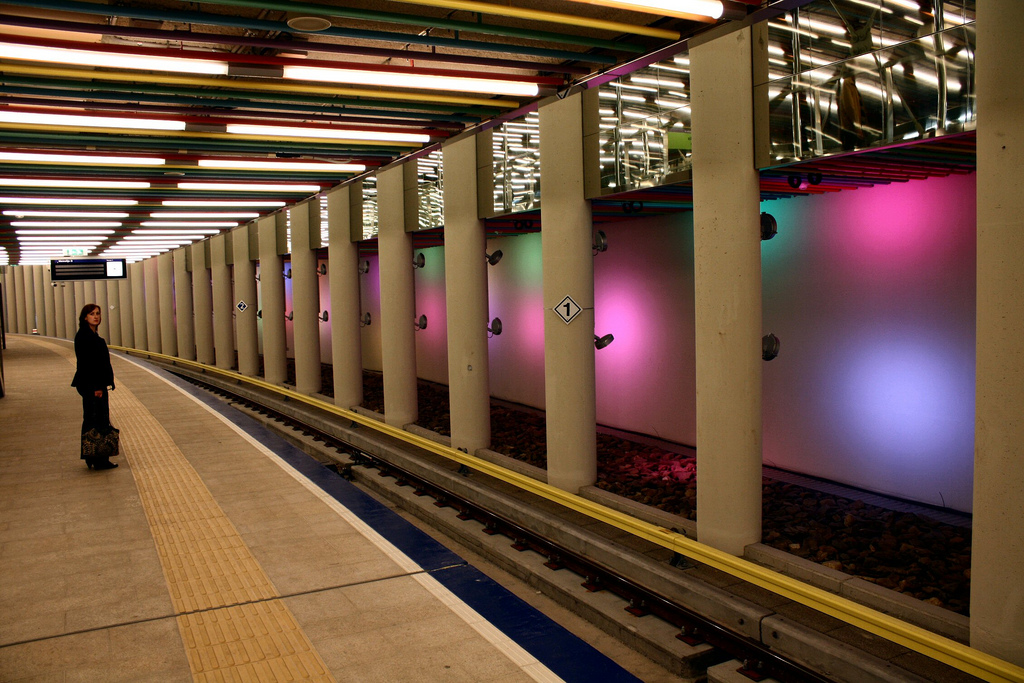 Opened in September 2012, the Toledo Metro Station was the 16th station built on Naples Metro Line 1. It is set along one of Naples main shopping streets. Designed by the Spanish Firm Oscar Tusquets Blanca, at 50 meters deep, the station extends below the ground water and is the deepest metro station built on Line 1 to date. One of Metro Napoli’s Metro Art Stations, it was designed around the themes of water and light. Curated by Achille Bonito Oliva, works of art include two William Kentridge mosaics, designed by the South African artist and realised by Neapolitan craftsmen. In the deepest corridor of the station are Robert Wilson’s Light Panels and works by Achille Cevoli.

The Parisian architect and designer Hector Guimard was commissioned to make the Entrance Gate to Paris Subway (Métropolitain) Station not only to mark an entry to the new Paris Métro, but also to help make this new mode of transportation appealing to Parisians. Entrance Gate to Paris Subway is designed in the style of Art Nouveau, an international style of decoration and architecture in the 1880s and 1890s that drew inspiration from nature and natural forms. The gate’s curvilinear lines and patterns were inspired by vines and flowers. Symmetrical, floral lights frame the Metro sign, both lighting the entrance and advertising the Métro.

Reported to have secret government-only subway lines as well as military tunnels and installations, the Pyongyang metro system has elaborate décor portraying their revolutionary history and the regime’s leaders. The system, one of the deepest metro systems in the world, doubles as a bomb shelter. Unlike other metro systems, the station names—Triumph, Victory, and Paradise—reflect nationalistic values rather than the stations’ geographic locations. Pillars reflect victory torches and lighting fixtures represent fireworks. Visitors can tour two showcase stations on a docent led tour.

Curious how art can add to your development or business? Contact us!