Transformations are physical changes that lead to a change in perspective. They are much more than pleasurable aesthetics alone! Transformations within an urban context bring about major changes such as economic and cultural revitalization and are positively linked to the development of city areas.

Artistic interventions help people break with everyday routines. They challenge people’s conceptions and behaviors by using space, form and place in unexpected ways. Art is a transformative product and the artist can be utilized as a tool for urban renewal and regeneration.

The artist has a special gift of seeing opportunities in improbable places. Transformations create moments that slow us down for a moment and present us with a new perspective. Arttenders’ Faye Ellen selected the 8 coolest transformations of urban environments and (public) interiors. 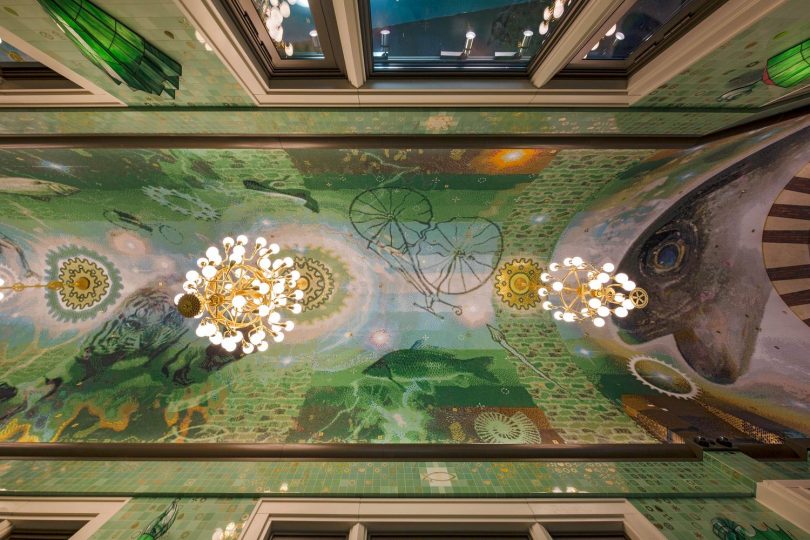 Amsterdam Oersoep was commissioned by Bouwinvest to transform an unsightly passage into a high-end hotspot. The artists worked together to create an ode to the canals of Amsterdam through a design executed in mosaic tiles, mirrors and chandeliers. The result is a durable artwork that lends the place an a high-end charisma.

2. The Cuyperspassage by Irma Boom Office

The Cuyperspassage is an excellent example of a transformation in an urban environment. The passage connects the city center and the waters of the IJ-river. It is used by 15,000 cyclists and pedestrians a day. The constructive design for the passage was drawn up by Benthem Crouwel Architects in collaboration with Powerhouse Company and Merk X.

The tunnel functions as a ‘slow traffic corridor’ which was exactly what many people in the city felt was lacking. The tunnel has nearly 50,000 Delft Blue tiles on one side. This tile tableau is designed by Irma Boom Office. When entering the passage from the city-side, the tiles depict the Warship Rotterdam by tile painter Cornelis Boumeester. While walking or cycling towards the North end the tableau fades away, the lines of the original work gradually dissolving. Then it builds up again in an abstract form from light to dark blue, as if it’s encouraging cyclists to slow down as the ferry comes into view. The wall of tiles recalls old kitchens in Amsterdam, so that the tunnel is experienced as a safe and homely place.

At the twelve Stazioni dell’Arte of Naples you’ll run into the big names of contemporary artists and architects. The Stazioni dell’Arte all have their own identity. Together they contain 140 works of art. The idea for this massive artwork came from Naples’ former mayor Antonio Bassolino and well-known Italian art critic Achille Bonito Oliva. The project itself is financed by the European Union and sponsored by a foundation of Neapolitan industrials and entrepreneurs.
The Neapolitans have great respect for this enormous underground museum. In a city known for aggressive vandalism it’s remarkable that none of the Stazioni dell’Arte have ever been damaged.

Metrostation Toledo is named Europe’s most impressive underground station by The Daily Telegraph and CNN. It was designed around the theme of water and light with mosaics by South African artist William Kentridge and works by Francesco Clemente, Ilya and Emilia Kabakov, Shirin Nehsat and Oliviero Toscani on display.

The Last Vegas Strip is arguably the most visited tourist destination in the world. It only recently received its first-ever park, “The Park”: a spectacular public space designed by !melk and commissioned by MGM Resorts International, the largest property owner along the Strip.

Private corporations and owners of the properties along the Las Vegas Boulevard came to realize the value in investing in outdoor public space versus real estate development. A more complete and mature urban condition has begun to form as a contrast to the artificial attraction that gave Las Vegas its reputation to date.

The cutting-edge design of “The Park” celebrates the context of the Mojave region and reinstates what Las Vegas once was – an oasis in the desert. The region is exposed to sun, heat, dust storms and scarcity of water. All design elements work together to create the most enjoyable urban experience possible. There are iconic shade structures, water features and desert plantings with drought resistant trees to help temper the Las Vegas heat.

Street artist Okuda San Miguel was commissioned by the so-called Church Brigade, a group of enterprising individuals, to cover the walls and ceilings with his unique brand of bright geometric figures. The church of Santa Barbara in Llanera, Asturias was abandoned for years and crumbling from neglect.

With sponsoring from Red Bull and help from online crowdfunding the building was salvaged and turned into a public skate park titled Kaos Temple, that resonates the grandeur of the Sistine Chapel. The grafitti is illuminated from every side by tall windows, which makes skating truly a sacred experience.

Freddy Mamani Silvestre is known as the “King of Andean Architecture”. He has built dozens of houses boasting bright colors and patterned motifs that originate in the craft traditions of his own indigenous Aymaran culture. With his architecture Mamani wants to show the world that his country has its own identity.

His architectural work in the fast-developing city of El Alto, Bolivia, is one element of broader cultural changes that have happened in the country since they elected indigenous president Evo Morales in 2006. There are 36 indigenous cultures in Bolivia that represent two-thirds of the population of the country. The so-called ‘spaceship architecture’ is a symbol for the rise of these natives.

Philly Painting is a community-driven art project in North Philadelphia. The goal of the project is to give the area an economic impulse by educating painters and tour guides. The result is ownership by the local community, a safer neighborhood and creating a ‘place to be’. The project is organized by the Philadelphia Mural Arts Program and executed by the Dutch artistic duo Haas&Hahn (Jeroen Koolhaas and Dre Urhahn).

Haas&Hahn are known for transforming urban landscapes around the world with vibrant artworks, most notably the favelas in Rio de Janeiro. The true spirit of transformation is at the heart of the Mural Arts collaboration with a range of funding and civic partners to revitalize and re-energize one of Philadelphia’s oldest commercial corridors, a section of Germantown Avenue in North Philadelphia at the intersection of Lehigh Avenue.

The Art at Work Project consists of a series of creative spaces in the CIC offices in Rotterdam. These spaces are transformed and customized by various artists through different forms of applied arts, in collaboration with Arttenders. This creates immersive and inspirational rooms, where entrepreneurs can meet, be inspired, work and socialize.

Art At Work is a project that consists of artwork in a monumental building – it makes adjustments to an already existing office space. Artists Iwan Smit, Sigrid Calon, Rotganzen, Studio Maky, Roel van Eekelen and Luuk Bode acted as interior designers, creating brand enhancing interventions with a strong relation to both CIC and the city of Rotterdam throughout the Groot Handelsgebouw.