In the past few years, art has become a big trend in hospitality and tourism. From famous street artists, such as Banksy, Invader, and Obey, to the contemporary elite like Jean-Michel Basquiat, Jeff Koons, and Damien Hirst. More and more artists are becoming part of the art movement in hospitality and tourism. The influence of art in hospitality facilities can be found in a wide array of practices, such as hotels, restaurants, bars, museum restaurants and even public transportation. Entrepreneurs around the world are commissioning artists to create work, or are buying art to differentiate themselves from competitors. Governments are also making some steps towards this path. From the moment you set foot in a new place, art can be the connector that makes the unknown known. It provides information about culture, history or everyday life. Even for local tourists, art can be something refreshing and interesting to follow.

Inspiring and advising clients on the impact art can have is Arttenders’ core business. Therefore, we started this series ‘The 10 most inspiring…’, showing leading examples of the use of art. First runner up: Ioanna Koubarou dove into the world of applied arts and gathered inspiration of art in hotel interior design.

In a New York Times article in 2009 , it was stated that “for new hotels, art isn’t merely decoration, but something more.” Nowadays, hoteliers are thinking even further outside the box, installing art in the most unexpected of ways and challenging guests to think more deeply about their experience. Art has become a fundamental, rather than ornamental, element of hotel design. Boutique hotels engage with art to produce an interactive play with their guests, be different and attract even more customers.

One of the best and oldest example of art in hotels is the Colombe d’Or that was established in 1920 in the village of Saint Paul de Vence in France, with an extraordinary collection of works by iconic masters like Matisse, Picasso, Léger, Braque and Chagall.

Another example is art hotel Atelier sul Mare, the only Art-Museum-Hotel in the world, on the northern coast of Sicily, Italy. The hotel rooms have been handed over to the artists to be transformed into immersive works of art and are designed to blow away the hotel guest. Different artists use this inspiration in different ways – from ‘Power’ (by Maurizio Marchetti), ‘Absorbing Nest’ (by Paolo Icaro), the ‘Mystery for the Moon’ (by Hidetoshi Nagasawa) or the reflective ‘Denial of the Sea’ (by Fabrizio Plessi).

An historic 17th-century building, with an original baker’s shop front, Hotel du Petit Moulin is a truly unique residence with flamboyant interiors designed by Christian Lacroix. Through the hotels’ decoration, visitors can take a look into Paris’ history, culture and art. The hotel is within walking distance of the Picasso Museum, Place des Vosges and the Opera Bastille. The atmosphere at Hotel du Petit Moulin changes from room to room which is very much its charm. From brightly colored 60s furniture in the bar, and plush textiles, leather sofas and highly decorative walls in the lounge to green corridors with polka-dot carpeting that lead to Baroque, Rococo and Couture designed rooms, it is a fascinating journey through the artistic expertise of Lacroix.

The 21c Museum Hotels, based in Louisville, Cincinnati, Bentonville, Durham, Lexington, Oklahoma City and Nashville, are a combination of a contemporary art museum and a boutique hotel chain. The first ‘museum’ that was launched was the one in Louisville in 2006 and the rest followed. 21c Museum is North America’s only museum dedicated to collecting and exhibiting contemporary art of the 21st century. The museum is open free of charge 24 hours a day, seven days a week. More than twenty special exhibitions and installations have been organized by the 21c Museum since its opening in 2006.

The restaurant and bar Proof on Main at 21C Museum Hotel in Louisville. (Photo: Magnus Lindqvist)

The ‘Asleep in the Cyclone’ room, designed as a tribute to the 1960s counter-culture commune era. (Photo: Ryan Kurtz)

CitizenM has found a way to create the budget traveler’s dream come true: a low-cost hotel with high-end design. There’s no concierge, no room service, and you check yourself in. But the stylish, compact rooms are decked out with high-tech gadgetry and plush, king-size beds–and all the free on-demand movies, bottled water, and Wi-Fi you could ask for. The hotels are the creation of Rattan Chadha. Since launching citizenM in Amsterdam in 2008, Chadha has opened four more hotels in Europe. In April, he launched his first U.S. hotel in New York City’s Times Square, and more are on the way.

A more modern version of art hotels is Hotel des Arts in San Francisco. The hotel consists of 13 Tourist rooms and 38 Residential rooms suitable for a longer stay, showcasing the contemporary works of emerging artists from around the world.  The hotels’ purpose is not just to decorate rooms with art but give the guests an interactive experience. The artists create their paintings with complete artistic control and the neutral simplicity, modern lightings and clean lined furnishings, allows their work to prevail.

New Hotel, in Athens, Greece was ventured by famed sibling design duo, the Campana brothers and it incorporates three different themes of Athenian culture in its design. First are rooms that display historic postcards, giving guests an insight into old Athens. Other rooms pay homage to fictional characters from Greek folklore called Karagiozis. The third theme for rooms embraces the ‘evil eye’ – a superstitious bead that guards against bad omens. New Hotel has 79 rooms and suites, many of which hold exclusive pieces of artwork .

The Schaller Studio, is a colorfully accented contemporary building, inspired by artist Mark Schaller’s working studio. Located in Bendigo, Australia the studio houses an excess of 240 of the expressionist’s original artworks. This initiative adds real value outside of simply introducing art as a differential. 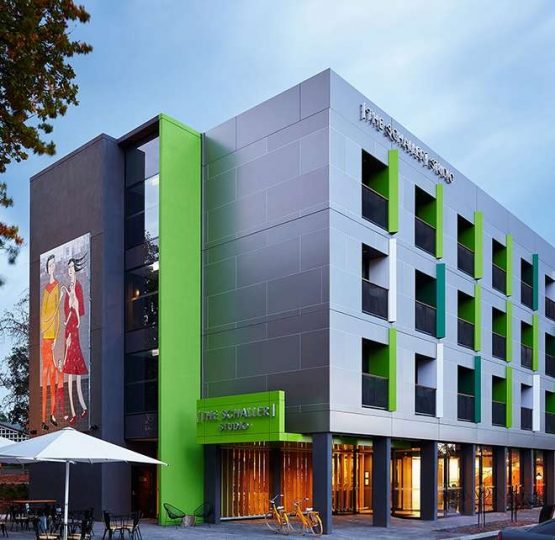 Located in the city of San Luis Obispo in California, the Madonna Inn hotel was initially opened as a motel in 1958. Its 111 rooms are decorated with a variety of themes bring the hotel’s style to life. The Gold Rush Steakhouse and the adjacent Silver Bar provide an extravagant atmosphere with shiny padded pink seatings and extreme floral carpets, while the Copper Cafe tones it down to red and the elaborate wood carvings we see throughout the hotel. Outside, the tennis and basketball courts in bright pink are an extension of the interiors.The Madonna Inn has been continuously used for photo shoots and has inspired pop artists like Weird Al’ Yankovic, who mentions the famous waterfall urinal, located in the lobby restroom, in his 1978 song “Take Me Down”.

The Au Vieux Panier Hotel in Marseille, France, reserves five rooms that are annually re-conceptualized by commissioned artists and designers. The artists, graphic designers, and painters from different locations and environments, are invited to design each room in the house in a short lasting style, in making each project something close to their style. The rooms characterize themselves by their differences in design. The hotel is in the city’s oldest quarter, the “Panier” or basket, named after a 17th-century bistro where the Marseillais descended to eat, drink, and satisfy their other appetites.

Want more information on interior art advices,workshops and brainstorm sessions? Contact Siobhan or Faye to discuss all the options!